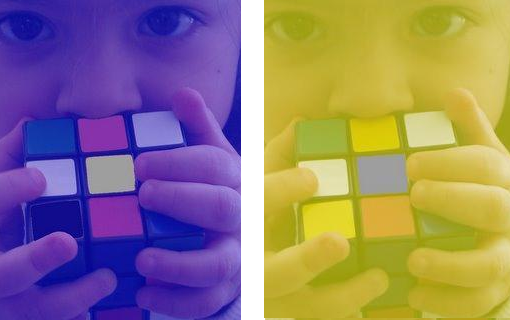 10 years ago I wrote a book for O’Reilly that remains one of my favorites to this day. The book—Your Brain: The Missing Manual—is still in print, and every once in a while I get an email from a reader who’s stumbled across it and discovered something weird and wonderful about the squishy gray matter inside our heads.

When it comes to human weirdness, I love pretty much every topic. But if I had to choose just one favorite part of Your Brain: The Missing Manual, I know what I’d pick.

At the time I wrote it my daughter was two years old, so I recruited her to create my own version of a famous color illusion. Here she is: 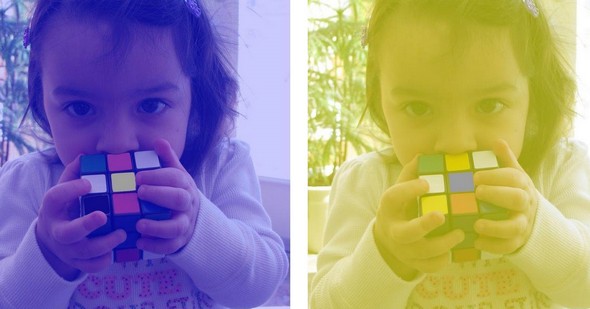 The illusion is found in center square of the Rubik’s cube. It’s not immediate obvious, but the trick appears gradually if you zoom into that portion of the picture, like this: 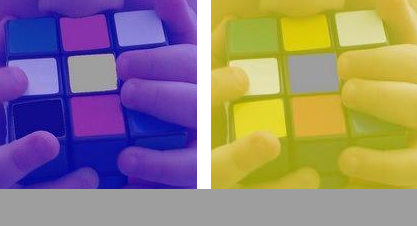 Here I’ve added a gray bar underneath the picture. The square in the center of the front face of the Rubik’s cube is actually an identical gray in both pictures. But it appears to be either yellow or blue depending on the information your brain picks up from the rest of the picture. It’s a similar trick to the infamous blue dress illusion that paralyzed the world a few years ago.

Still not convinced? Here’s the gray bar superimposed over the picture:

Even in this example, your brain still wants to cheat reality. If the gray bar looks like it shades from one tint to another, that’s an illusion as well. If you don’t believe me, pop the picture into an image editor and look for yourself (or just dial up the zoom setting on your browser until you can see just the gray and none of the blue-shaded or yellow-shaded picture around it).

In this illusion, your brain isn’t exactly wrong—it’s simply compensating for what it believes is a difference in lighting. It concludes that a square that appears gray under blue light is probably yellow, and a square that appears gray under a yellow light is probably blue. In other words, your brain has a built-in routine for evaluating lighting conditions. This is the reason you can see normally at home in the evening, even though the artificial lights you’re using cast a yellow-red shade of light that’s dramatically different than the blue-tinted radiance of the sun at noon.

As you probably already know, your brain falls victim to plenty more illusions when it tries to make automatic judgments. It will hear things that aren’t said, feel things that aren’t there, and invent reasons for beliefs that aren’t true or memories that never happened. And worst of all, it never tells you what it did.

Your Brain: The Missing Manual is a fun romp through the tangled passageways of your brain. To check out the full book, which tackles the brain science of love, aging, emotions, memory, and creative thinking, visit https://www.amzn.com/0596517785. Or, you can read up on a few more optical illusions here.